Menu
Log in
Register
Install the app
You are using an out of date browser. It may not display this or other websites correctly.
You should upgrade or use an alternative browser.

Two switch forward based on UC3845

I've been contemplating at building a two switch forward converter for some time. Since I need a power supply for some powered speakers, I thought it's a good time to build one.
As far as I've learned about this topology, the advantages are:
- single ended drive (it can use any flyback controller)
- it can do current mode easily
- single positive DC rail needed (unlike half bridge)
- can do as high power as a half bridge
- no need for a reset winding
- seems more robust

The biggest disadvantage is the high side transistor drive circuitry, which can't be the same as in a half bridge since both transistors turn on at the same time, so there's no way to charge the bootstrap capacitor. There are integrated drivers that can work with this topology, but they're rare. The easiest method is by using a gate drive transformer.
Schematic is below. Feel free to discuss and suggest anything.
I chose a typical main transformer, but any big enough core can be used, even salvaged from an ATX power supply.
The gate drive transformer can also be salvaged from ATX power supplies or EE16, EE25 or even small green toroids can be used. The smallest one I tested could fit on a fingertip, and it was bifilar winded. The windings must have the same polarity.

What power are you expecting from this smps?
B

I only need about 200W at most.
I did some modifications and added things that I forgot.
I have a question regarding the output chokes. Each output will have its choke and the two power rails will be wound on it. But are they winded in the same direction or in oposite directions?

Staff member
I still believe that you can use the UC3845 or similar chip to drive a GDT and forget the regulation at this first test.

Make sure that your SMPS is working and try regulating it.

For 200W you don't need a regulated power supply I think.

Hope that helps
B

Could there be any issue with regulation? The biggest problems that I had were with driving transistors.

Staff member
No problem with regulation, use GDT, there are many circuits for the same chip with regulated output

try different core for the GDT

bogdan2011 said:
I have a question regarding the output chokes. Each output will have its choke and the two power rails will be wound on it. But are they winded in the same direction or in oposite directions?
Click to expand...

Regarding the output choke if you are going to use the same core for both rails then make sure that the winding sense is one opposite the other.
I had this issue a week ago and all sorts of things I was seeing in the output especially when trying to load one rail. If you have separate cores for each rail it is not important which direction you wind.
How to do it on one core?
You can wind both windings in the same direction (Bifilar) but on only one winding swap the start of the winding with the finish. This will give one of the winding a different sense (that is one opposing the other)

Coming to regulation.
As you might well know the load on the smps is varying all the time when used for audio. The value of inductance has to be good enough for light load and also when it comes to full load. The lighter the load the more inductance needed on the output inductor as the smps will have a very short dead time and may work in discontinuous conduction mode (DCM) Here the energy stored in the inductor has to make up for the lack of energy between pulses. When on load however it will switch to Continuous conduction mode (CCM). The output inductor value however has to be trimmed by trial and error to find the right value so that it will not be too high in inductance as this will surely heat up the core unnecessarily not to mention it may also saturate.

Non regulated smps.
If however you will opt for a non regulated smps like MicrosiM suggested life will be more simple. Say an IR2153 (HB topology) and a couple of IRF740 will do the job nicely at 200w power. Your ETD39 will give you 600w peak. Here you will not be needing a large inductor but a 6uH on each rail will filter any high switching noises and also limit the initial surge when charging up the secondary capacitors. As a rule of thumb use 1uF per watt of input capacitance across the 320v rail. Your 220uF/400v cap will suffice for 200w. All you need is 2 CBB capacitors of 0.47uF each to divide the voltage. About 2000uF on each rail for the secondary capacitors. Do not forget that music does not draw continuous power and only about 60% or so on a class AB amplifier if it is class D the power needed is less.

One last note. An unregulated smps working at near 50% duty cycle is more quieter than a regulated one. Spikes create noise and need more careful filtering.

Thank you, that's very useful advice!
I have built an IR2153 SMPS and had issues with it, never managed to solve them (there's a thread in here about it).
The TSFW topology seems easier to implement, and I had success with the GDTs I tested.
I will test both the unregulated and regulated versions. What about primary side regulation via the auxiliary winding? Is it less strict than secondary, reference based regulation?

bogdan2011 said:
What about primary side regulation via the auxiliary winding? Is it less strict than secondary, reference based regulation?
Click to expand...

I cannot give you an answer about this because I never experimented with regulation in this manner. What I can say is that it will only sense the voltage drop on the primary side of the transformer. I am assuming that when the voltage drops on the primary so does on the auxiliary and this will enlarge the pulse width to compensate, however all the other losses on the secondary will still be present. There will be some voltage drop in the diodes and capacitors and the secondary winding itself, these will not be compensated. It is usually used on low voltage supplies like 5 or 12v where the percentage of voltage drop will be insignificant, however when higher voltage is used the voltage drop will be more pronounced for the same percentage.

what pcb software do you use>?

what pcb software do you use>?

Some updates on this project: the power supply works but the output voltage is too low and it drops even more under load. It seems that I'm having some issues on building transformers, every project that I tried lately has failed. I eventually built myself a small core test rig where I can test them at lower voltages, but they all seem unsuitable, so something's wrong in what I'm doing.
K

Thanks, I do also.

I did use eagle, but since it is changed with that internet trouble I do not use it anymore, kicad do come close to that
as learning curve. 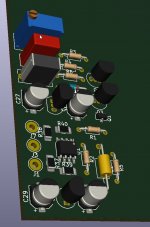